109 – Increasing Voluntary Contribution in a Public Goods Game through a Behavioral Policy Implementation: an Experimental Test

Abstract
The aim of this work is to show that in a repeated Public Goods Game situation it is possible, through the implementation of a properly specified policy reward, to increase and sustain higher level of contribution with respect to the only “punishment” equilibrium at net zero costs.

I investigate theoretically the possibility that implementing a lottery mechanism in a social dilemma could drive a consistent portion of the game participants’ decision to a different decision choice with respect to Von Neumann-Morgenstern Expected Utility Theory prediction. In particular, grounding my expectations on Cumulative Prospect Theory, I anticipate and exploit the players’ overweight of an unlikely event such as the gain deriving from the extraction of a single high prize assigned randomly at the end of all the treatments to one individual among the sub-group of players that choose to contribute at least the prescribed amount to the public good.

I present a model that exploiting this regularity in economic decision making and endogenizing the probability of winning the final prize could increase the level of contribution to the public good without additional expenditure. Then I test this theoretical prediction setting up a controlled laboratory experiment. 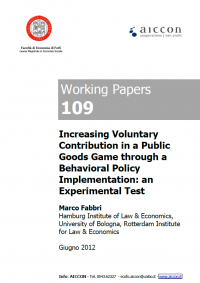