90 – Can a click buy a little happiness? The impact of business-toconsumer e-commerce on subjective well-being

Abstract
This paper presents the first empirical investigation into the effect of e-shopping on subjective well-being. The analysis relies on a nationally and regionally representative dataset from Italy (n = 4,130) drawn from the 2008 wave of the Survey of Household Income and Wealth (SHIW) carried out by the Bank of Italy. Probit, OLS regressions and instrumental variables estimates show that e-shopping is strongly and positively associated with subjective well-being.

Introduction
This paper presents the first empirical investigation into the effect of e-shopping on individual happiness. The role of different types of consumption in subjective well-being has been addressed in a number of previous studies (Dittmar & Drury, 2000; Meyer & Sullivan, 2003; Ahuvia, 2007; Dunn et al., 2008; Nicolao et al., 2009; Dunn et al., 2011). However, to the best of our knowledge, the impact of computer-mediated consumption has never been empirically assessed before. 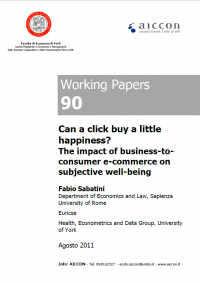