The case of Italian unification is here considered. I focus on three historical episodes of conflict, which caused the death of a big fraction of population in three specific locations.

When towns in the areas surrounding these locations are considered, I show how each kilometer further from the hit town is associated with a significant increase in the electoral turnout in European Parliament elections held in 1979-1999. I believe these differences to reflect differences in social capital endowments across towns.

The pattern is confirmed when World War I casualties are used as a measure of social capital at the beginning of the XXth century. Results are robust to the inclusion of a number of controls and to several robustness checks. 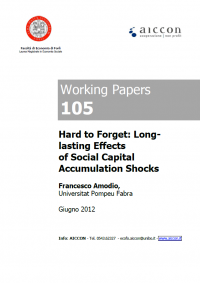