Abstract
Worker-managed firms (WMFs) represent a marginal proportion of total firms and aggregate employment in most countries. The bulk of firms in real economies is ultimately controlled by capital suppliers. Different theoretical explanations suggest that workermanaged firms (WMFs) are prone to failure in competitive environments. Using a panel of Uruguayan firms based on social security records and including the entire population of WMFs over the period January 1997-July 2009, I present new evidence on worker managed firms´ survival. I find that the hazard of exit is 24%-38% lower for WMFs than for conventional firms. This result is robust to alternative estimation strategies based on semiparametric and parametric frailty duration models that impose different distributional assumptions about the shape of the baseline hazard and allow to consider firm-level unobserved heterogeneity. The evidence suggests that the marginal presence of WMFs in market economies can hardly be explained by the fact that these organizations exhibit lower survival chances than conventional firms. This paper adds to the literature on labormanaged firms, shared capitalism and to the Industrial Organization literature on firm survival. 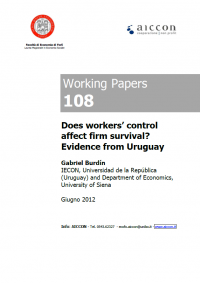