Abstract
Empirical analyses on the determinants of life satisfaction often include the impact of the number of children variable among available controls without fully discriminating between the two (sociorelational and pecuniary) components.

In our empirical analysis on the German Socioeconomic Panel we show that, when introducing household income without correction for the number of members, the pecuniary effect prevails and the sign is negative while, when we equivalise income with the most commonly adopted equivalence scales, the non pecuniary (socio-relational) effect emerges and the impact of the variable is positive and significant above a minimal scale elasticity threshold.

We further reject slope homogeneity and show that the positive relational effect is stronger for males, below median income households and East Germans.

We interpret these subsample split results as driven by heterogeneous opportunity costs. Our empirical results give rise to a paradox: why people have children if the aggregate effect on life satisfaction is negative? We provide in the paper some interpretations consistent with our findings.

Some of them are based on motivational complexity. This implies that demographic policies and the paradox are strictly connected.

Effectiveness of tax/subsidies impacting on fertility crucially depends on whether the children paradox may be solved within the self-interested rationality paradigm. 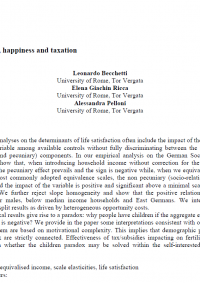