Abstract
We set up a theoretical framework to analyze the possible role of economic growth and
technical progress in the erosion of social capital. Under certain parameters, the relationship
between technical progress and social capital can take the shape of an inverted U curve. We
show the circumstances allowing the economy to follow trajectories where the stock of
social capital grows endogenously and unboundedly.

Introduction
In his best-seller Bowling Alone, Robert Putnam (2000) documents how most indicators of social capital have followed an inverted U path in the United States during the twentieth century: during the first two-thirds of the century, ―Americans took a more and more active role in the social and political life of their communities in churches and union halls, in bowling alleys and clubrooms, around committee tables and card tables and dinner tables‖, and they behaved in an increasingly trustworthy way toward one another. Then, beginning in the 1960s and 1970s and accelerating in the 1980s and 1990s, an inexorable erosion of the stock of American social capital started. Apparently, year by year Americans became less generous and trustworthy, less engaged in community problems and less inclined to meet their friends, neighbours, and acquaintances. 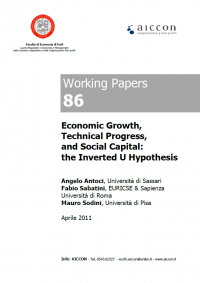