We argue that in a capitalist enterprise the need to fix wages is crucially influenced by the asymmetric distribution of decision-making power, which can entail the use of private information and authority in favour of the strongest contractual party (the employer), and against the weaker contractual party (the employee). The capitalist entrepreneur can take decisions whose negative consequences are borne by workers in terms of lower wages and more intensive work-pace. Excessive wage reductions in the face of negative exogenous shocks, and of too risky investment decision represent the main instances of such opportunistic behaviour.

Fixed wages can be thought as workers’ best response to the emerging risk of the employers’ moral hazard, but this implies a heightened risk of lay-off since wages and employment levels cannot be fixed at one and the same time. As a counterexample, we observe worker cooperatives, which depart from the framework of the interaction between a principal and an agent in the presence of contrasting interests and private information. Indeed, several empirical studies show greater employment stability and wage flexibility in worker cooperatives vis à vis capitalist firms. 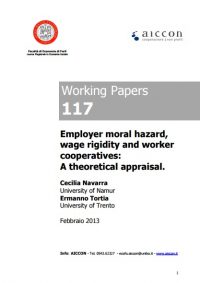