In this paper we consider the phenomenon of the reception of migrants, political refugees and asylum seekers in Southern European countries as instance of patterns of social exclusion versus inclusion and regeneration. The emergency nature of the increased inflows of asylum and protection seekers coming from war and other disrupted geographical areas calls for urgent legislative, policy and administrative measures directed to build integration and to avoid exclusion and conflict.

To tackle these socio-cultural and political issues, we follow a twofold strategy: (i)  we introduce the general trends of immigration and the legislative and policy measures adopted in Italy, which represents the main migration frontier in Europe, over the last few years starting from the Arab Spring in 2011; (ii) we contextualize the patterns of migrants’ inclusion at local level, where dedicated national resources and actual adiministrative and reception measures are deployed. In this context, we consider the case of the Union of Municipalities of Romagna Faentina in Central Italy, which recently started several dedicated programs.

In this local context, reception and integration are managed through a web of public, civil society and third sector organizations. The center of the web is found in one specific public agancy (the ASP, Agency for Personal Services), which is in charge of managing reception facilities and of issuing public calls directed to deliver the most needed and inclusive services. Specific organizations created and run by both Italian and immigrant citizens, delivering language teaching for migrants, administrative services, and cultural integration are considered.

The pattern of social regeneration connected to the growing phenomenon of migrants’ inflows in a country such as Italy, which is affected by the aging of the native population, and by depopulation and deindustrialization of many peripheral areas, emerges as the result of networking between public agancies and civil society organizations, and of the accomplishment of dedicated governante. 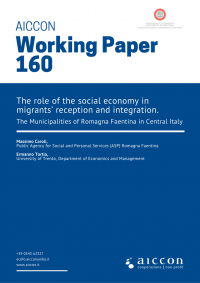