Abstract
The civil economics paradigm presented in this paper has two main characteristics. First, it identifies the philosophical roots of the limits of our socioeconomic system in the reductionist views of human beings, corporations and value. The three reductionist views not only fail to capture an important part of the reality, but also produce poverty of sense of life (also defined as eudaimonic wellbeing) and of life satisfaction, thereby generating a suboptimal level of wellbeing. The civil economy paradigm proposes an alternative where it is acknowledged that i) part of the individuals depart from purely self-regarding preferences and develop otherregarding and relational skills enabling them to overcome social dilemmas, ii) part of the productive system depart from the profit maximization paradigm and aim to satisfy the interests of a wider range of stakeholders beyond shareholders, and iii) value is, beyond GDP, the stock of cultural, environmental, spiritual and economic resources that a community can enjoy. The second qualifying point of the civil economy paradigm is that it proposes a richer four-hand approach to political economy (as an alternative to the traditional two-hand approach) where actions of the traditional invisible hand of the market and the visible hand of institutions in solving failures are complemented and supported by the complementary action of the two additional hands of grassroot citizens’ participation and socially and environmentally responsible companies. In our paper we explain and document that these two additional hands are already at work, thereby confirming that the reductionist hypothesis on individuals and corporations is rejected by empirical evidence.
In the paper we argue that the civil economy paradigm, by increasing social participation and generativity of all actors, has the power of bridging the gap between the current suboptimal and the socially optimal sense of life (well described in the concept of “common good”). We as well provide evidence showing that the paradigm is far from being unrealistic and that its sprouts are already working in several fields of our society, preparing a more thorough transformation and full replacement of the old paradigm at theoretical level that is near to come. 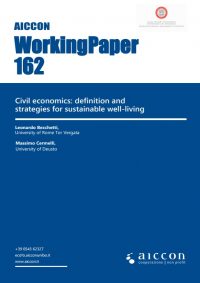