If this how you as an economist look to it, I would like to make some corrections on this view. Take for instance the position of shareholders in a company. Economists are inclined to say that shareholders are the owners of the company. Legally this is incorrect.

I will focus on the NPO-forms in the European Union. This Union is strongly directed to liberalization of the economy in Europe. An dominant aim is the harmonization of company law. The legal forms for NPOs as such have not the interest of the EU. Commercial NPOs doenjoy yet the freedom of establishment within the EU. 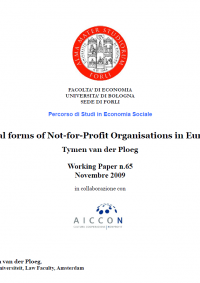