Social Innovation, generally acknowledged as the capacity to respond to emerging needs through new forms and/or models of collaboration, represents one of the fields in which the non-profit sector has demonstrated, mainly through its entrepreneurial wing, its distinctive and not residual characteristic.

On the social level, and more generally on the economic level, innovation is a process that while characterized by outcome uncertainty, cannot be understood as a casual or spontaneous result.

Innovation is to be understood rather as a strategy, an orientation that must be pursued on a collective level, a dimension in which – once again – the role played by rules and institutions seems to be crucial and by consequence the impact that its behavior can have.

The study of innovation in economics begins with the famous contribution of Schumpeter, in which innovation is contextualized in an even more general theory of economic development, characterized by sudden and spontaneous changes that moves the system from a situation of initial equilibrium to a new status quo.

The “creative-destructive” process is what characterizes this passage from one phase to the next. It refers to the introduction of new economic rules that result from a new combination of elements that already exist. Entrepreneurs, individuals or organizations, lead these transformations, possessing a capacity to think out of the box and find new and better combinations of existing elements (ars combinatoria). 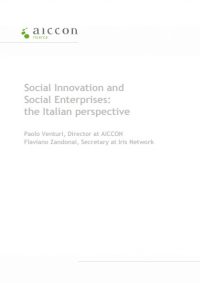