176 – Why economists and public opinion views on immigrants’ contribution to local economy do not match ? The role of tv exposure

There is a paradoxical divergence between the opinions of economists (favourable) and those of the general public (much less favourable) about the impact of immigrants on the economies of destination countries.

We try to shed light on the issue by investigating the determinants of the general public opinions in European countries in the last decade and find that the paradox has some rational and some less rational explanations.

First, as expected, low skilled workers and less educated respondents have a more negative view, likely due to the stronger competition threat they suffer from immigrants.

Second, and more surprising, differently from what happens with exposure to other media, time spent watching TV gives a strong and significant contribution to the negative opinions on the role of immigrants. 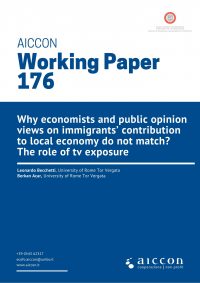