The paper is focused on how to approach commons management and preservation issues without using of market institutions. For doing this, we adopt a Marxian viewpoint and endorse a contemporary political theory called commonism. Firstly, we discuss why commons are not commodities and introduce commonism’s main pillars. Secondly, we briey out-sketch main inuences of Marx’s thought on Amartya Sen’s capability approach and why Sen’s theory can be useful to rene some theoretical aspects of commonism. Finally, Elinor Ostrom’s design principle for self-governing, common-pool resources institutions are intertwined with capabilitarianism in order to dene some capabilities for commons.

In recent times, there has been a growing debate on common-pool resources, the commons, and on the design of institutions aimed to govern and manage them. Well-known examples of commons are: groundwater basins, forests, ocean sheries, clean air, mainframe computers, software code, planetary climate control, international political institutions and settlements, immaterial collective infrastructures and the Internet; and the kind of unitary resource individuals derive from commons can vary from air and water to information bits or budget allocations (Blomqvist and Ostrom (1985)).

Such an increasing interest in common-pool resources nds motivation, inter alia, in the attempt to solve a classic problem of their provision and usage: the Hardin’s tragedy. In his famous article on Science, Hardin (1968) predicted the massive deforestation in tropical countries, or the collapse of several ocean sheries, socially-dramatic outcomes that would have resulted from systematic over-usage of the commons caused by not-internalized (negative) social externalities. Like in Prisoner’s Dilemma game situations, collectively optimal individual decisions about commons usage contrast with individual rationality dictates. Individual choices will be socially harmful, leading to over-usage andimpoverishment of common-pool resources. 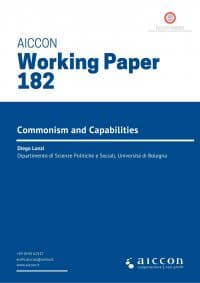