The GAS as Laboratories of Civil Economy

For four years we have been witnessing the biggest global economic crisis since the end of World War II. It is a systemic crisis that is shaking the certainties of the economic mainstream. This paper fits in this tacit context. It talks about the Italian phenomenon called GAS, or Solidarity Purchasing Groups, and aims to demonstrate that the GAS are laboratories of Civil Economy.

In the following pages we will see how the last two decades have rediscovered the interest and study of the Civil Economy’s tradition of thought. Looking to the past is what normally happens in times of crisis, when the foundation upon which the economic structure was built is more or less tacitly called into question.

The thesis argued here, is that the GAS are an expression of this resurgence of interest in the Civil Economy. What’s more, the GAS experience goes a step further, it is a new practice that looks to the future. We will therefore talk about the GAS as a case in which the market becomes an instrument of relationship and a place of civil and civilizing meetings. We will also see how this relationship becomes more important than the purchase itself.

Finally, the ultimate goal of this paper is to bring a little contribution to the change in the cultural matrix that has so far supported the economic system. This is because we believe that «the significant problems we have cannot be solved at the same level of thinking with which we created them» . […] 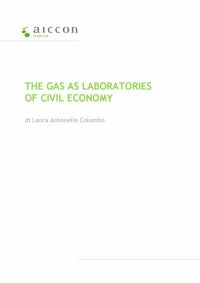